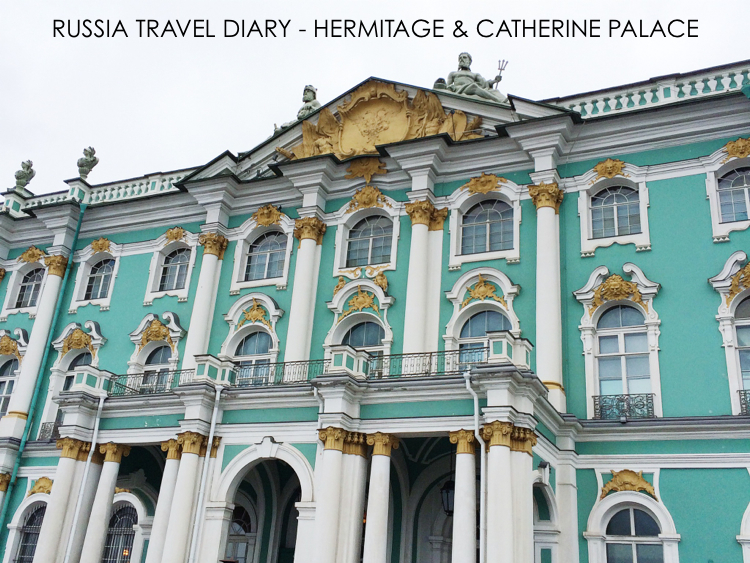 Itâ€™s my 30th birthday.Â  And Iâ€™m in one of my all-time favorite cities in the world.

There isnâ€™t a word (or an emoji, for that matter) to depict how happy I am.

After a breakfast of star-shaped pancakes and mimosas (courtesy of the Seabourn Quest),Â  we made our way through Russian customs and onto the bus, which would be taking us to the Hermitage. Â Also known as one of the worldâ€™s most spectacular museums.

Iâ€™ve been utterly blessed to have toured the extensive art collections, housed in the Winter Palace and an additional 4 buildings, twice already.Â  I knew exactly where my favorite Picasso was, the best angle to see the ever popular Rembrandts.Â  I also knew there was a new exhibit of historical Russian clothing that I had to see.

The downside of not getting Russian visas was that we were bound to the tours arranged by the ship.Â  The upside of these tours were getting into the museums early, and skipping a number of lines.

Another downside â€“ having to stay with the tour.

Our guide was excellent, moving our large group with ease through the crowded rooms and galleries.Â  A knowledgeable art historian, she shared details of the great works in the Hermitage â€“ the two Madonna and child paintings by Raphael, the room of exquisite Rembrandts, and the extensive Impressionist gallery housed in the museum.Â  She touched on the politics of Russiaâ€™s art collection, noting a recent failed attempt by the curator of the Pushkin State Museum of Fine Art in Moscow to bring the entire art collection under one roof.Â  Prompted by my question, she explained in detail how the works of the Hermitage were carefully packed and shipped off to Ekaterinasburg, in central Russia, for their protection during WWII.Â  (Ekaterinasburg was also the site of the Romanov familyâ€™s exile and execution). 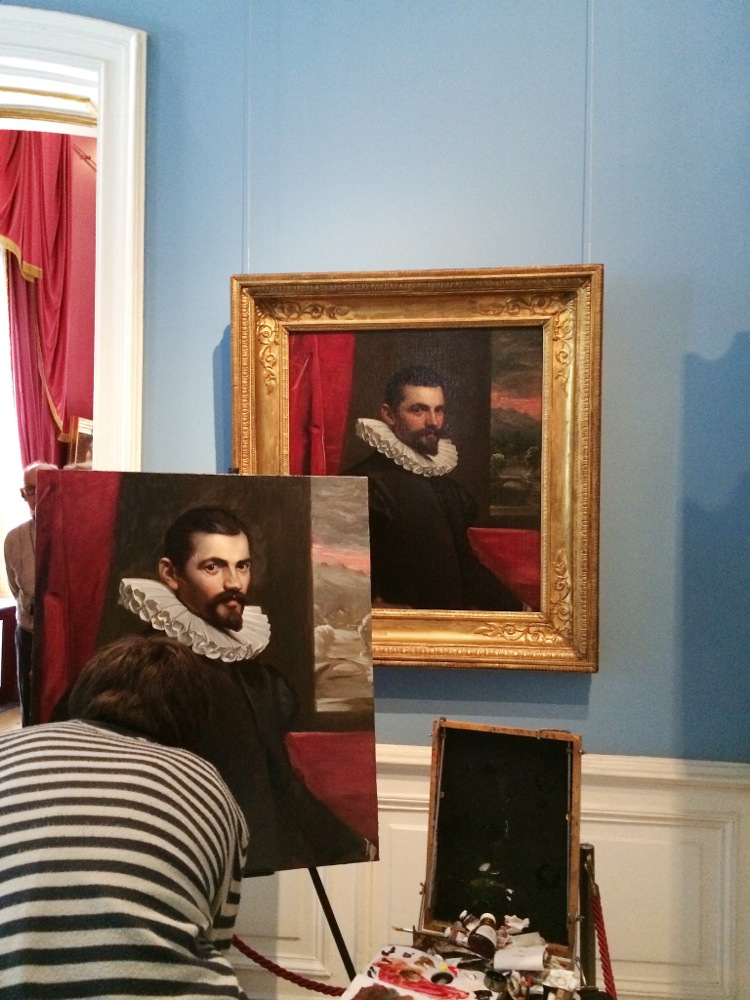 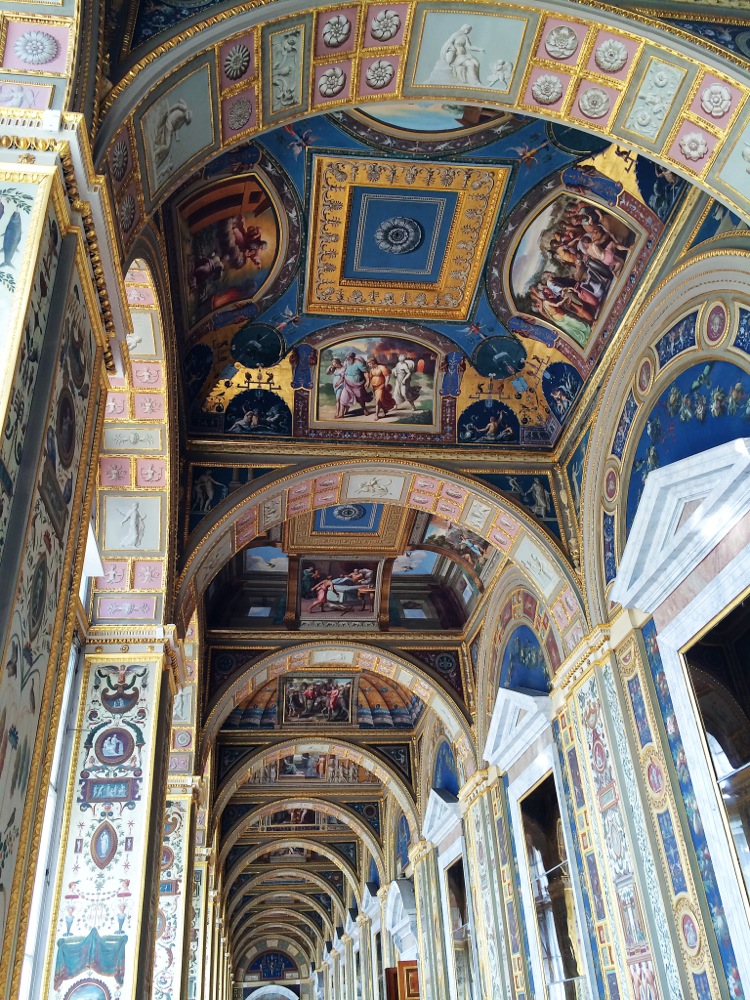 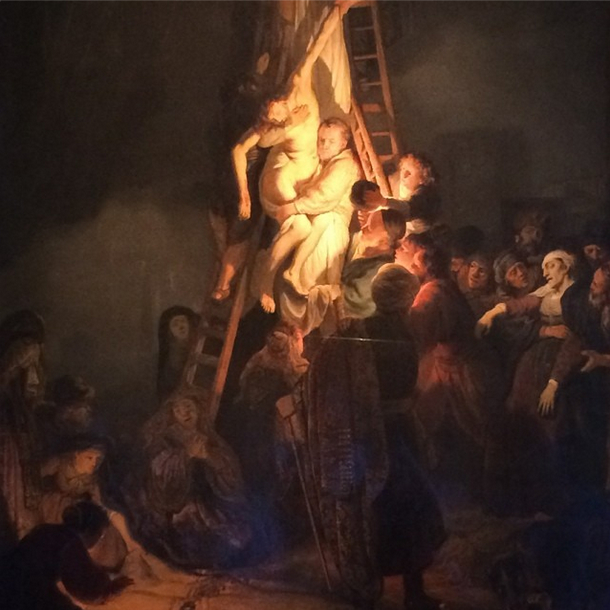 What makes the Hermitage such a remarkable home for art is the beauty of the building itself.Â  The complex is a work of art â€“ the parquet and inlaid floors, the murals and tapestries, the painted ceilings and walls.Â  While the Louvre, the Met, and the Victoria and Albert Museums are all stunning buildings, they simply donâ€™t match the majesty and artistry of the Hermitage.

Itâ€™s a home worthy of the priceless art collection it houses.

The fashion exhibition exceeded my expectations.Â  I examined a Chinese gown purchased by Nicholas II for his mistress, a sequined cape and dress dating to the 1800s.Â  Gowns of velvet, brocade, silk were at every turn.

I could have easily spent hours in those rooms.Â  Sadly, I only had 20 minutes. Â Again, downside of the scheduled tour.

It was bittersweet to leave the Hermitage after a brief 2 hours.Â  However, my hunger pangs and the departure of the bus won out â€“ I wanted lunch, and I knew Iâ€™d be back someday.

The afternoon of my birthday was spent indulging on the shipâ€™s excellent fare and rosÃ©, and taking a luxurious nap.Â  My husband woke me with a cappuccino.

Happy birthday to me.

We dressed for the opulent evening ahead of us â€“ an intimate tour of the Catherine Palace, and a classical music performance in the grand ballroom.Â  I donned a jersey maxi and my new birthday earrings, and my husband was handsome in his slacks, button down, and blazer.

And then we ate our faces off in the shipâ€™s colonnade, where an impressive buffet was laid out.

Despite the heavy traffic, we made it to Pushkin and the impressive palace of Catherine the Great.Â  She commissioned the castle in 1717, seeking a summer home of her own (the Romanovs previously summered at Peterhof, another jaw-dropping royal home).Â  The sky blue, white, and gold exterior is constructed in an elaborate Rococo style.Â  First visit or not, jaws dropped as we approached the open gates. 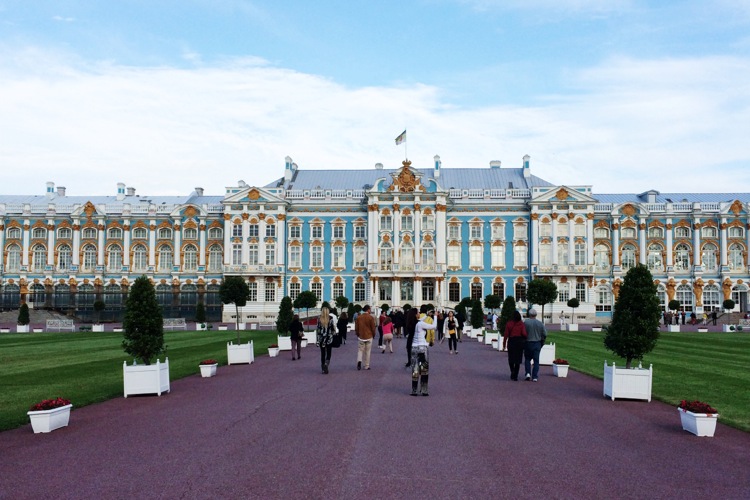 Fellow visitors spent the walk up to the palace snapping pictures of the impressive exterior.Â  I couldnâ€™t blame them â€“ I lagged behind the crowd to capture a panoramic snap of the palace.Â  As we made our way up, a band welcomed us with jaunty Russian military tunes.

The interior entrance is drab when compared to the ornate exterior.Â  Drab, that is, until you cover your shoes with ugly brown shower caps (the secret floor varnish of the Hermitage is apparently restricted to just the Hermitage).Â  Once our feet wereÂ adequately covered, we made our way into the ornate white staircase.

WHITE. Â The moldingsÂ and the sculptures were a snowy white, and accented with bold red window treatments and rugs. Â A stark contrast from the gilded Hermitage, but an impressive sight nonetheless.

The palace was openedÂ that evening for our group alone – a far cry from the overflowing crowds from my last visit. Â We made our way through the rooms – each with its own character. Â The familiar Russian gilded accents welcomed us again as we made our way from the bedrooms of the royal families, the salons, dining rooms. Â Musicians were interspersed throughout the rooms, playing selections from Tchaikovsky, Stravinsky, and other famed Russian composers. 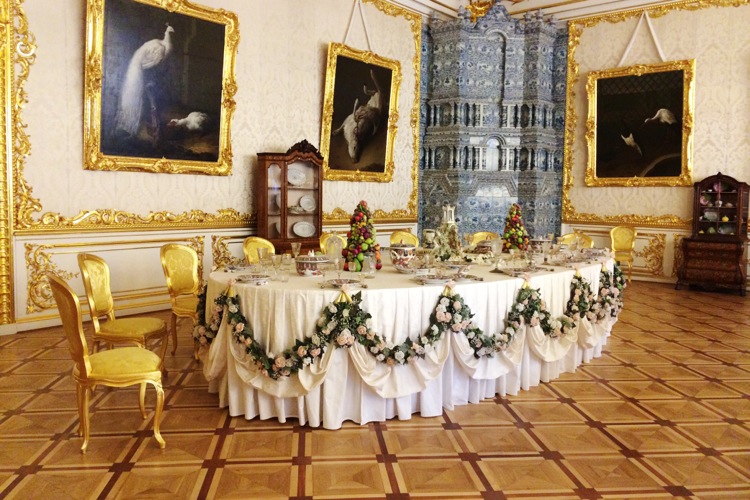 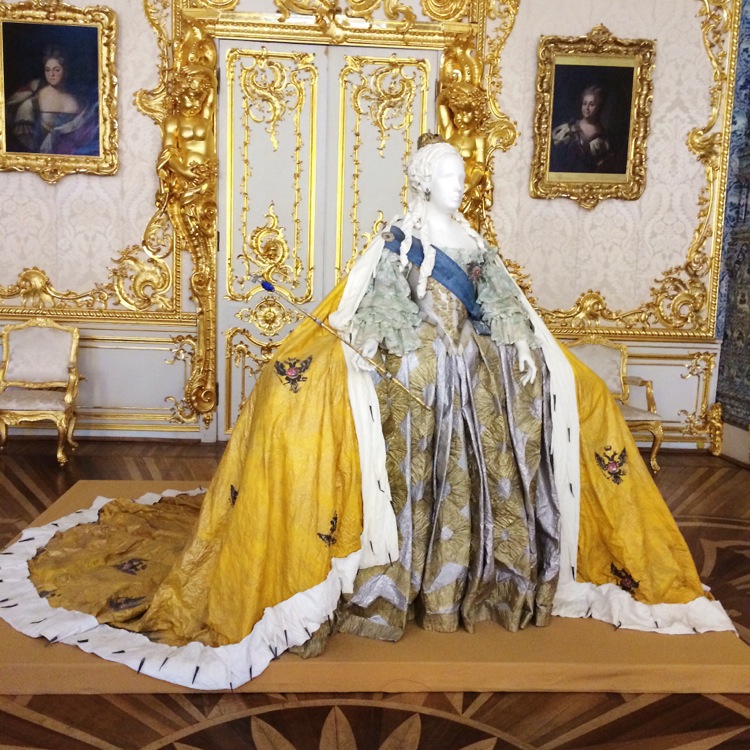 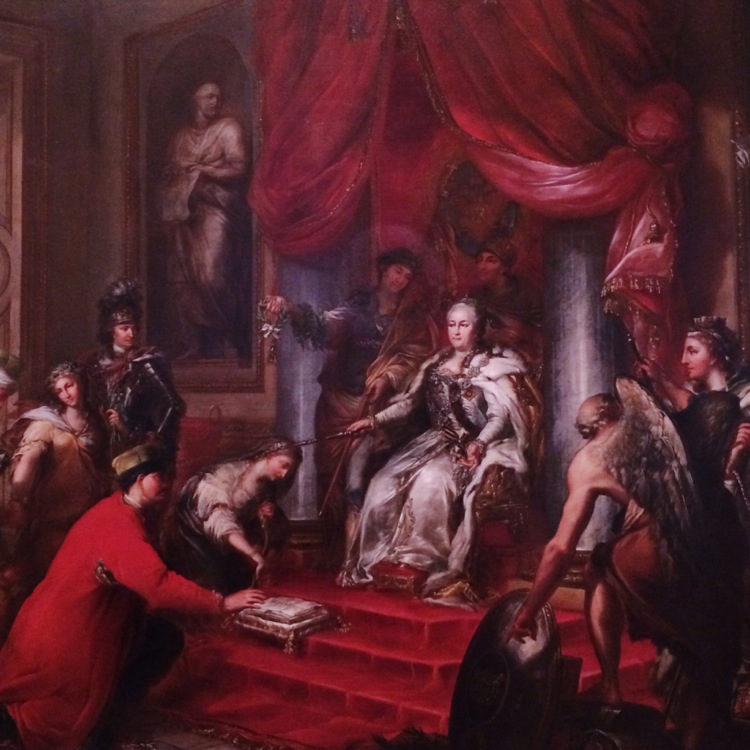 The most impressive room in the palace is, without a doubt, the Amber Room. Â While the original panels of amber were stolen by the Germans in WWII, they have been meticulously recreated in a mosaic style to cover the walls in a warm glow. Â This roomÂ usuallyÂ has a strict “no photography” policy, but the rule was waived for our group. 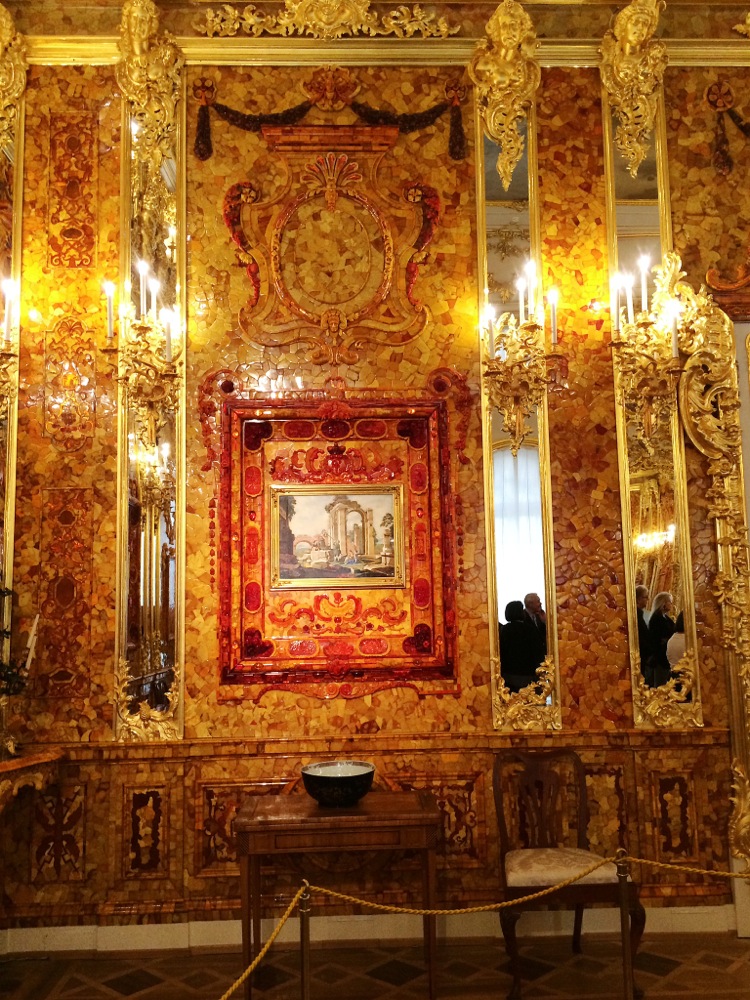 Seabourn, you are seriously spoiling me.

The tour ended in the magnificent ballroom, where musicians were playing classical Russian selections and champagne was being served. Â There were some decidedly cheesy moments during the performance (appearances fromÂ “Empress Katherine” and her consort), but the musical and Russian folk dance performances were beautiful indeed. 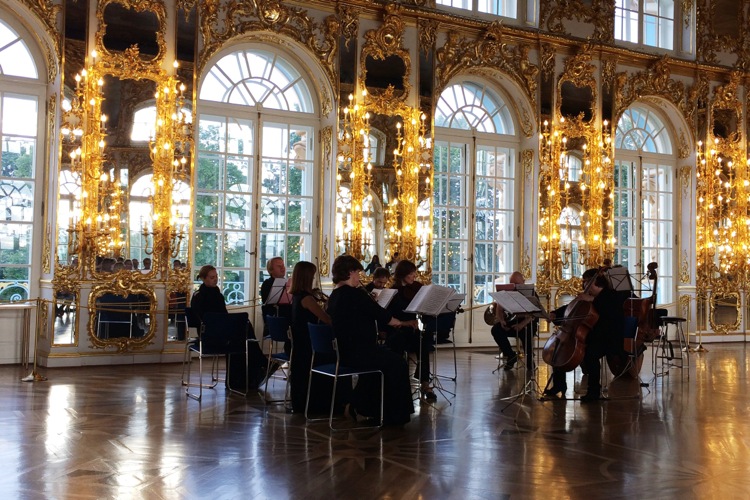 ThatÂ is the way to tour the Catherine Palace. Â No other.

We made our way outside, where the sun began to setÂ (at 10:30 pm) and the band had returned. Back to the buses and ship for us, but not without some wonderful memories.

Travel Tip – How to Sleep on Flights